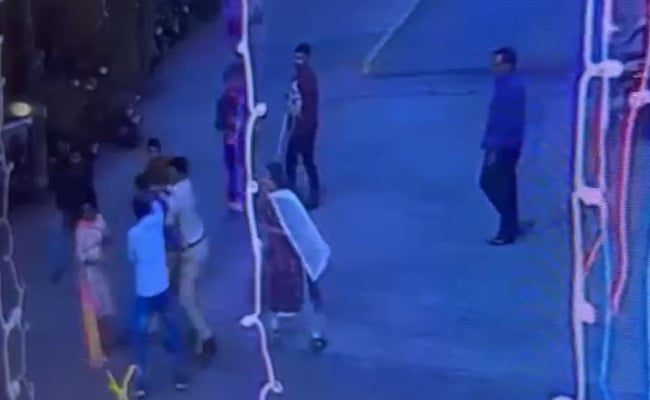 The police are reportedly being pressurised from each side.

Party employees from the Eknath Shide faction of the Shiv Sena, which is in energy in Maharashtra with assist from the BJP, at the moment thrashed their majority accomplice’s Thane office-bearer over a dispute relating to putting in banners. The two sides threatened one another throughout the brawl, which left a BJP employee bloody. Both sides then went to the police. The BJP has alleged that the police aren’t taking the matter critically.

In safety digicam footage, a bunch of individuals could possibly be seen attempting to position a placard when out of the blue a battle breaks out. One man can then be seen being crushed up by the group. A free-for-all later ensues, the place a number of males might be seen hitting one other man with picket sticks whereas he stumbles to the bottom.

On Thursday, there was a dispute between BJP’s Prashant Jadhav and Shiv Sena’s Shinde faction over the set up of banners at Parabwadi in Wagle Estate, Thane. When the police had been knowledgeable, they warned each the teams and the state of affairs calmed down. However, on Friday night, 15 to twenty individuals reportedly attacked Prashant Jadhav, who has suffered a critical head harm throughout the assault.

The BJP has blamed the Shinde faction’s native former Corporators Vikas Repale and Namrata Bhosale for the incident.

There has been pressure between the 2 teams since, with the potential for one other conflict.

BJP MLAs Niranjan Davkhare and Sanjay Kelkar met Wagle Estate division Assistant Commisioner of Police Gajanan Kabdule relating to the incident. The BJP has accused the police of not taking the matter critically.

The police are reportedly being pressurised from each side.